The picture was similar for residential buildings completed, Western Cape having 40% of the national share in terms of value, Gauteng 31.3% and KZN 15.2%.

Gauteng’s share of the total market has conspicuously dropped through 2020-2022 period of Covid-19 lockdowns and beyond.

If the Western Cape sustains this stronger momentum in residential building activity, relative to the rest, 2022 will be the first year on record in which that province records a bigger value of plans passed and completions than Gauteng (and every other province).

One mustn’t ignore the possibility that the drop in Gauteng’s share since 2019 could have something to do with municipal reporting to StatsSA.

However, after a bigger drop in values reported than the others during the lockdown 2020 year, causing the first initial big loss in Gauteng’s share, in 2021 Gauteng recorded a big recovery to the tune of 53% in value of plans passed (compared to Western Cape’s 55.5%) and 30.3% in completions (compared to Western Cape’s 37%). This rebound in Gauteng’s reported activity in 2021 appeared very much in line with others, so reporting issues aren’t apparent.

But in 2022, fortunes for the country’s largest economic province, and its most populous, appear to have weakened. Whereas the Western Cape has seen year-on-year growth of 39.9% in the value of residential building plans passed for the 1st 5 months of this year (and +40.8% in residential completions), Gauteng saw a -23.4% decline in plans passed (and a -16,4% decline in completions) over the same period.

KZN, the 3rd largest market, saw +16.5% growth in residential plans passed over the period, and a massive 101% in completions.

While one cannot rule out reporting issues, there may well be something in this shift in relative share of the development market more away from Gauteng.

Firstly, the Western Cape has seen its share of the value of residential building activity broadly growing since near a decade ago, and its residential market has performed stronger than other major regions in the period following the 2008/9 Global Financial Crisis.

In addition, evidence has existed in the FNB Estate Agent Surveys of 2022 to date that the Western Cape market has had the strongest market activity in its overall residential market, and Gauteng the weakest, if estate agents’ perceptions are reasonably accurate.

There has been strong evidence in the post-lockdown period of strong net “semi-gration” of skilled middle-to-higher income households to the Western Cape, and net outflows away from Gauteng.

The semi-gration flows to the Western Cape have also increasingly broadened outwards from Cape Town, to the Southern Cape as well as up the West Coast, requiring significant new development activity in those regions.

The sentiment towards the Western Cape has been decidedly more positive it would appear, attracting significant skills inflows and likely investment flows in the process.

Indeed, in recent times our FNB Commercial Property Broker Survey has also pointed to Gauteng markets being weaker than major coastal metro property markets (and Cape Town metro the strongest), which suggests that Gauteng, and especially Greater Johannesburg, may have a weaker economy of late than the main coastal regions.

Should the Western Cape’s share in value of residential development be the largest for the entire 2022, and there seems a good possibility of this happening, that would be the first time on record that this has been the case. And it would say something about the economic management and performance of that province relative to other regions.

Gauteng will remain the largest economy in South Africa for many years to come. But major coastal regions, especially the Western Cape, appear to be chipping away at the extent of its dominance slowly.

The story of SA’s procurement crisis 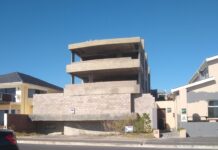 Council fails to act on eyesore

Abrasive solutions for the construction industry

Future cities could be 3D printed – using concrete made with...