THE delayed FRAP (Fishing Rights Allocation Process) appears to be increasing anxiety levels in the local fishing sector – especially amongst the larger players, who have the most to lose.

Last month the South African Deep-Sea Trawling Industry Association (SADSTIA) urged that government not repeat the costly mistakes made during the 2016 allocation of rights to the hake inshore trawl fishery when rights are allocated to 12 other commercial fisheries next year.

SADSTIA disclosed some frightening findings from an analysis of the allocation of rights to the hake inshore trawl fishery – an industrial fishery that targets hake and Agulhas sole on the Cape south coast.

The organisation pointed out that since 2016, the allocation of rights to the hake inshore trawl fishery has been reviewed by the High Court no less than eight times. What’s more, 30% of rights in the fishery remain unallocated.

“The key finding of SADSTIA’s analysis is that the allocation of many rights of small value to a large number of new entrant companies has compromised the stability and competitiveness of the hake inshore trawl fishery. The economic and environmental impacts will be felt for years to come.”

Ratheb argued that the allocation of rights to the hake inshore trawl fishery in 2016 did not follow the recommendations of the NDP.

He said the Department of Environment, Forestry & Fisheries (DEFF) dramatically increased the number of right holders in the fishery – from 16 to 37 – and reduced the share of the allowable catch allocated to established companies by 30%.

This, he said, resulted in large losses for the companies with the investments and experience to add value to the catch and maximise employment. Ratheb stressed these companies were substantially transformed in terms of black ownership – noting that in 2016 their average black ownership was estimated to be 82%. Black ownership now sits at 85.6%.

SADSTIA’s analysis shows that the allocation of rights to the hake inshore trawl fishery achieved an increase of 3.5% in the black ownership of rights holders. But this small gain was attained at considerable economic cost.

Ratheb added: “One of the biggest problems with allocating rights to a large number of new entrants is that individual rights are very small. This means that new entrants are unlikely to secure the finance necessary to invest in a vessel, build factories or participate in the fishery in a meaningful way.” “Instead, they rent their quotas to established companies, pushing up the cost of raw material and compromising the business models of the processing factories.”

Ratheb said the loss of quota by the established companies, who own the processing facilities, drove up costs, affected the international competitiveness of the fishing industry and ultimately impacted on the number and quality of jobs the sector could support.

Ratheb explained that SADSTIA’s analysis suggested that if the DEFF had comprehensively evaluated government’s success in transforming the hake inshore trawl fishery – as well as properly assessed the investments and jobs supported by the established companies – it might have re-evaluated its administrative decision to fundamentally restructure the fishery.

“This is why we are so supportive of the DEFF’s announcement that it will undertake a detailed socio-economic impact assessment study (SEIAS) of the hake deep-sea trawl fishery and 11 other fisheries to which rights will be allocated in 2021,” Ratheb said.

Ratheb said SADSTIA was hopeful that the SEIAS would be conducted by reputable economists and would accurately assess the state of transformation, and the depth of investment and job creation of the individual fisheries – particularly the hake deep-sea trawl fishery (which is by far South Africa’s most valuable fishery).

SADSTIA pointed out that an independent economic study conducted in 2018 found that the fishery generates annual sales of R4.5 billion and accounts for approximately 45% of the value of the commercial fisheries.

Around 70% of the fishery’s catch is exported, and the sector sustains 7 300 direct jobs and an estimated 29 200 indirect jobs.

Ratheb contended: “If the SEIAS is well done and those who are responsible for rights allocation gain a fundamental understanding of the unique characteristics of the fishery, the DEFF can avoid making the same mistakes it made with the hake inshore trawl fishery.”

He said a key issue was to ensure that policy was formulated and aligned to the President Cyril Ramaphosa’s priorities of preserving and creating jobs, encouraging investment and promoting inclusive growth. “Decisions need to be based on facts, not hearsay, and they must ensure that progress in transformation and job creation are rewarded.”

In the 12 month reporting period I&J – which is controlled by consumer brands giant AVI – reported a 7% decline in revenue to R2.33 billion with operating profit sinking over 40% to R238 million.

The company said the COVID-19 pandemic had a significant impact on the second half results as full compliance with isolation and quarantine protocols reduced the number of employees available to work. This meant reduced processing activity and a concomitant reduction in fishing activity during the fourth quarter.

I&J said the loss of production impacted cost recoveries in both the fishing fleet and the land based factories. In addition, congestion at the Cape Town port delayed export shipments, which hampered the margin in the quarter.

But I&J indicated that operations had subsequently recovered to normal capacity. The company is targeting a material improvement in the second half of the new financial year.

Sea Harvest reported a 7% increase in revenue to R1.29 billion in the six months to end June – the top line figure benefiting from a weaker exchange rate and increased ‘in-home consumption’ in both local and international retail markets.

Sea Harvest did, however, see a lower value product mix and a slowdown in both local and international food service markets as a result of various lockdown levels being implemented across the globe.

Still Sea Harvest managed some stringent cost containment and scored from a lower fuel price – which helped gross profit up 14% to R526 million with the gross profit margin fattened to 38% (2019: 36%).

Operating profit from the Sea Harvest’s hake-rich South African fishing segment was constant at R254 million (2019: R253 million) – although the operating margin thinned slightly to 20% (21% in 2019). 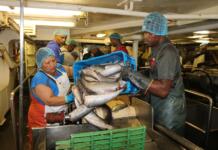 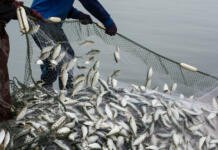