Machine Tools Africa (MTA) is set to take centre stage again in May 2020 at the Expo Centre in Johannesburg, South Africa. Enjoying strong industry support, the expo will remain a standalone show as it was last year, which was the first time in 20 years that the event had been staged as an independent exhibition. It had enjoyed many years running alongside the world-renowned Electra Mining Africa, but its need for increased exhibition space was matching the growth in the industry and a separate show became a necessity. Over 5900 visitors attended last year’s MTA to source new products and services and to find out about latest industry trends and technologies.

The MTA exhibition is a Machine Tools Merchants’ Association of South Africa (MTMA) event in partnership with the organisers, Specialised Exhibitions Montgomery. Hans-Peter Neth, chairman of the MTMA, is upbeat about the next edition of Machine Tools Africa. He said that exhibitors from last year’s show achieved positive results and were extremely happy with the number and quality of visitors they had at their stands.

The importance of the machine tools industry to South Africa was demonstrated by a visit to last year’s expo by Jeff Radebe, Minister in the Presidency. Following a walkabout at the expo, Minister Radebe addressed expo exhibitors and visitors.

He said that tools are the key to translating the potential of the manufacturing industry into a successful game changer for the country and the continent. “The tool making industry has a greater role to play throughout the continent in partnership with other countries to encourage regional growth. Locally the industry is a vital base for many manufacturing industries, such as the automotive industry.”  As such the industry has been earmarked as an important sector in the National Development Plan (NDP).

Gary Corin, Managing Director,Specialised ExhibitionsMontgomery says it is of significance for a government minister to attend a show such as this. “The Minister’s presence at last year’s show is an endorsement of the importance of the manufacturing sector to the country and indicative of the government’s belief that manufacturing is essential to this country. It also demonstrates the level of its commitment to the industry’s future development.”

High performance machine tools touch every aspect of our lives. “Machine Tools Africa 2020 will be the biggest trade exhibition of its kind in Africa,” says Corin, “and a showcase of everything that twists, turns, rotates, cuts, forms, bends or shapes.” 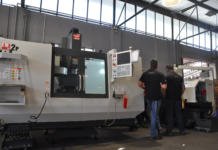