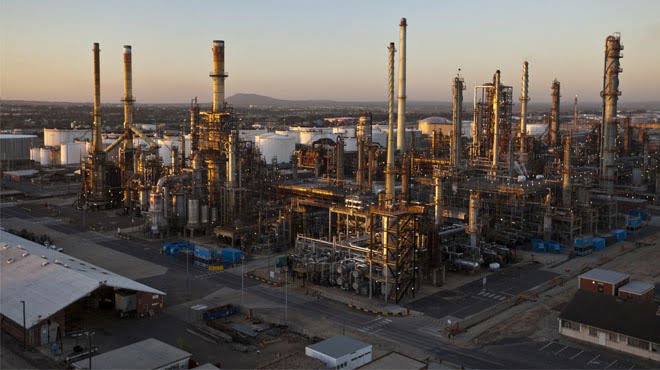 Chevron South Africa, who trades under the Caltex brand in the country, launched production at its refinery situated in Milnerton, after one if its most significant and successfully planned maintenance and safety inspections. The investment alone was approximately R440m and generated an additional 3,000 contractor jobs for the region.

The Chevron refinery invested a further R450m in the construction of a multi-point ground flare and elevated flare, which will further reduce the refinery’s environmental impact.

“Planned refinery maintenance and safety inspections are practiced world-wide to allow for technology and operational upgrades, to uphold high levels of safety and to ensure a refinery is running optimally, resulting in fuel security. During maintenance periods supply constraints are carefully mitigated through the building up of strategic fuel supply in the time leading up to any planned maintenance and safety inspection,” says Doug Pottenger, General Manager at the Chevron Cape Town Refinery.

Refineries across the world, no matter their age, require constant investment and innovation. The Digboi Refinery is the world’s oldest operating oil refinery located in the northeast corner of India, which was commissioned in 1901. In 2011, the Chevron El Segundo Refinery situated in California in the United States celebrated 100 years of being in operation.

“The Chevron Cape Town Refinery, which was constructed in 1966, is young in comparison,” says Pottenger.

He adds, “We inject direct capital of more than R300m into our refinery annually – in terms of general maintenance and operational developments, above the planned maintenance and safety inspection investment.”

The Chevron refinery sustains approximately 13,500 direct and indirect jobs in the Western Cape.

Of the 3,000 contractors hired during this year’s maintenance and safety inspection, around 2,600 contractors were on site on any given day. These jobs were made up of 67 different skill categories which ranged from skilled artisans to semi-skilled and unskilled contractors.

The refinery maintenance and safety inspection has a significant ripple effect whereby individuals and companies benefit. Above increased employment and skills transfer, a number of small businesses benefited from catering to hiring of marquees and scaffoldings. In fact, 1,370 tons of scaffolding were erected during the inspection, enough to build 4m X 4m X 6.4 km tall tower.

Chevron’s refinery spends over R700m annually on local suppliers, all of which are through B-BBEE accredited companies and 25% through black owned companies.

Construction of the world-class multi-point ground flare and a new 100m elevated flare, using advanced technology to replace the existing flare, started in November 2014 and is now complete and in operation at the refinery.

“Driving innovation at the refinery is a key priority for us,” says Pottenger. This investment alone resulted in employment for 500 local residents and will further improve the refinery’s operational efficiencies. The multi-point nature of the flare will mean that the gas will be combusted safely, quietly, and smoke-free.”

“During maintenance inspection periods, the refinery takes every possible precaution to mitigate unnecessary or unplanned emissions. Refinery emissions are independently monitored and the refinery adheres to air quality regulations nationally and internationally.”

“We place the highest priority on the health and safety of our employees and the surrounding communities at all times and especially when conducting maintenance inspections,” says Pottenger.

Pottenger concludes, “We have one of the best safety records in the industry, and our preventative approach has helped us achieve our reputation for safety and operational effectiveness. We are very proud of all our employees and additional contract workers for their hard work and the long hours they have dedicated in implementing the recent inspection.”