The results of two drill holes at the extremes of the Karoo basin presented at a Fossil Fuel Foundation workshop on unconventional gas showed that the presence of economically recoverable shale gas was questionable.

That is why the Council for Geoscience would drill a 4,000 meter hole near Beaufort West in an area that had the best chance of proving the presence of economically viable shale gas. The so-called “sweet spot” was identified based on old Soekor drill holes from the 1960’s. The prospective area was defined due to the presence of organic carbon, shale thickness and vitrinite reflectance values from other gas producing basins, so that the shales of the Whitehill Formation south of 29°S would be the ideal target. 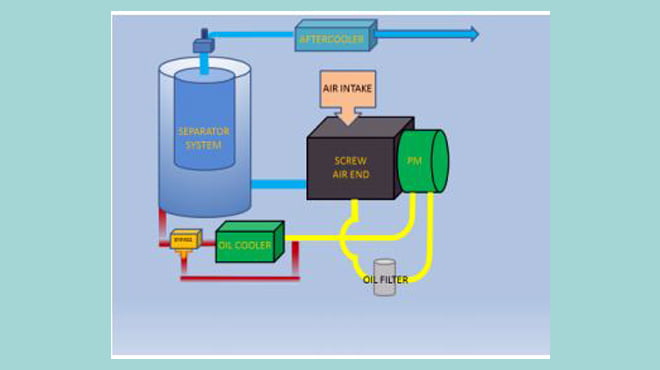 The two holes by the Karoo Research Initiative (Karin) were selected to give a better idea of the geology of the Karoo Basin. One hole was drilled at Witzenberg near Ceres in the Tankwa Karoo, while the second hole was in the former Transkei near Willowvale in an abandoned quarry.

The Ceres drill hole found pure fresh artesian water at about 670m, but minimal shale-gas potential, while the Willowvale drill hole only intercepted the Whitehill shale formation at about 2,300m instead of the expected 2,000m, and found it was intersected by dolerite sills.

The two main reasons for questioning the presence of shale gas was that the intrusion of large volumes of igneous dolerites at temperatures of 1,100 degrees Celsius would have baked the sediments in the immediate vicinity and driven off all potential petroleum and gas long ago, while in dolerite-free areas the compression to form the Cape Folded Mountain Belt would have produced temperatures in excess of 200 degrees Celsius which is far above the temperature at which gas would have been cooked off.

The aim of the deep borehole near Beaufort West would therefore be to obtain new data on the hydrocarbon potential of the lower Ecca Formations, the Karoo Basin deep stratigraphy, lithology and structure; any deep-seated aquifers and their properties; as well as establish a baseline for any micro-seismic activity. This would then enable the Council for Geoscience to provide scientific evidence to support policy development.

An assessment of 137 shale formations in 41 countries outside the United States estimated that shale resources, taken in conjunction with Energy Information Agency’s (EIA) own assessment of resources within the United States, indicated technically recoverable resources of 345 billion barrels of world shale oil resources and 7,299 trillion cubic feet (tcf) of world shale gas resources. Currently, only the United States and Canada are producing shale oil and shale gas in commercial quantities. To put the tcf into context, only one tcf has provided the Mossgas gas-to-liquid plant with enough gas for at least 20 years of operation. 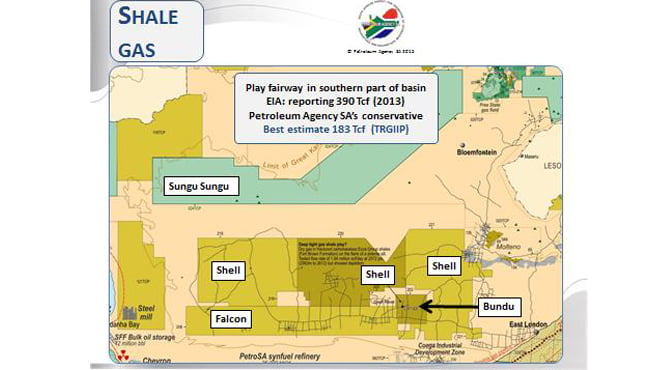 Falcon and Bundu have both updated the environmental management plans needed for shale-gas exploration licences, but Shell, which has the largest concession in the Karoo, has not. Once Falcon and Bundu were granted exploration permits, they would conduct seismic studies first and then exploration drilling. Hydraulic fracturing or “fracking” would not take place before 2020, by which time regulations on fracking were likely to be final.

A Shell-commissioned study by economic consultancy Econometrix estimated that extracting 50 tcf, or about a quarter of Pasa’s conservative estimate of South African shale gas reserves, would add US$20bn or 0.5% of gross domestic product (GDP) every year for 25 years and create some 700,000 jobs.

The delay in moving from concept to actually being able to use some shale gas means that President Jacob Zuma would unlikely to be still President so that he could not see the benefits to the economy of what he called a game changer in his November 2013 speech.

“We are extremely excited about the prospect, because as government we consider hydraulic fracturing for shale gas a ‘game-change’ opportunity for the Karoo region and for our economy at large. We must explore this potential. Government is fully aware of concerns that have been raised on hydraulic fracturing, including issues of water and the environment. The Mineral Resources Minister will therefore be coming back to this area early next year to consult with communities, and to hear what the people have to say, before any further decisions are taken by government on this matter,” Zuma said.

The fracking revolution in the US created more than 1.7 million jobs, and this could grow to 3 million by 2020. New taxes and royalties could amount to more than US$110bn by that time, helping to close budget gaps. At the same time, historically low US natural gas prices, which are a third of those in Europe and Japan, are prompting billions of dollars of investments in US energy-intensive advanced manufacturing. It also indirectly led to the halving of global oil prices from mid-2014 onwards, bringing price relief to millions of oil consumers around the world.

Royalties from the muck pile