QDOS peristaltic pump technology from Watson-Marlow Fluid Technology Group, is delivering a significant reduction in maintenance time – from 1.5 hours to just 5 minutes – at the local authority effluent plant in Selters (Westerwald), Germany. The Qdos pump is being used in preference to traditional diaphragm pumps for metering precipitants that help eliminate phosphate in wastewater.

The local authority of Selters (Westerwald) in the west of Germany operates a modern effluent plant for purifying wastewater and treating slurry. Wastewater from nine local communities with a population of 11 500 is purified here.

“Wastewater is purified and discharged into a nearby stream – the Saynbach,” explains plant manager Achim Linder. “An important stage in the purification process is the elimination of phosphates, most of which come from domestic washing and cleaning products.”

The addition of the precipitant converts the phosphate solution into insoluble phosphate compounds, which can then be isolated. The introduction of the ferric chloride from a large tank takes place at the precipitant metering station, with metered controlled using phosphate measurement. Depending on the phosphate content of the inflow water, delivery is between 60 and 250 ml of ferric chloride per minute. Until fairly recently, diaphragm metering pumps were used, but these proved insufficiently robust.

“The ferric chloride attacked the pump diaphragm, meaning it had to be changed every three to four months,” explains Mr Schenkelberg. “This took one of our technicians at least an hour every time and, because of the subsequent leakage of ferric chloride, almost as long again to clean the metering station.”

For this reason, automation experts from Siershahn-based Jonas Schaltanlagenbau GmbH were invited to help find an alternative.

“In view of the susceptibility of diaphragm pumps we had to consider an alternative functioning principle, which brought us quickly to peristaltic pumps and the market leader Watson-Marlow, who recommended their Qdos pump,” says Benjamin Bullert, project Manager at Jonas Schaltanlagenbau.

The decision was made to test the Watson-Marlow Qdos 30 metering pump in the precipitant metering station.

“The simple but effective functioning principle did not take long to convince us of its suitability,” says Mr Schenkelberg. “Qdos is also intuitive to use and easy to operate.”

The greatest advantage of the Watson-Marlow Qdos pump series, however, lies in its minimal maintenance requirement and the resulting reduction in downtime.

“Previously, we always had to factor in a time slot of 1.5 hours for changing a pump diaphragm,” states Mr Schenkelberg. “In contrast to this, the pumphead on the Qdos can be changed as a complete component in just a few simple steps. It takes five minutes at most.”

Employees at the Selters local authority plant are also more than satisfied with the maintenance intervals on the Qdos. They report that the diaphragm had to be changed three or four times a year with the old pump, whereas the ReNu pumphead on the Watson-Marlow Qdos has already lasted for a full year.

Not only can the pumphead be changed in minutes without the use of tools but, unlike changing a diaphragm, it can also be done without mess. The flow direction on the pump can be reversed easily, and the precipitant chemical fed back into the storage vessel from the pipe system. This means that hardly any fluid escapes while the pumphead is being changed, thus making maintenance much simpler and safer.

The pumpheads can be removed and replaced quickly and easily, without special tools or knowledge, thus minimising downtime during maintenance.

The pumphead can be configured specific to site requirements, either left or right on the pump housing, which is particularly advantageous in restricted environments. Good sealing and integral fluid recovery prevent unnecessary wastage and safeguard the operator. The pump is controlled via a menu-led intuitive user interface with a 3.5″ TFT colour display and easy-to-see status indicators. Keyboard, display and all connecting terminals are easily accessible.

Qdos pumps are innovative and versatile in application, and are available in various sizes. Qdos 30 delivers fluids at a rate of 0.1 to 500 mℓ/min, while the larger version, Qdos 60, delivers up to 1000 mℓ/min at pressures up to 7 bar. Both are suited to challenging metering applications in the fields of water processing and disinfection, controlling pH value and metering flocculants, reagents and chemicals. 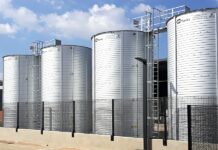 Platinum can move the needle on the economic growth SA so...

Hilton to double hotels in Africa in next five years –...

Turbulence as SAA board chair Magwaza tenders his resignation