THE last time Stellenbosch-based liquor group Distell – then Stellenbosch Farmers Winery – got involved in the beer industry  (with controversial businessman Louis Luyt) was in the seventies, and that did not end well as the then market leader SA Breweries landed the knockout blows in a short lived beer war.

Fast forward about 45 years, and Distell is back in the beer market – but this time with a more formidable ally in form of Dutch brewing giant Heineken and Namibian Brewries (the maker of Windhoek and Tafel beers). In short Heineken has made a takeover proposal for all of Distell’s brands – excluding its international whiskey brands. At the same time Heineken will be taking control of Namibian Breweries – which along with Distell – will form an African beverages giant strong enough to take on the likes of ABInBev (which owns SA Breweries), Diageo and Pernod Ricard. For the record, the Heineken proposal values Distell at a cool R40 billion.

Now Distell may have been kept out of the beer market for decades, but the group managed to corner a lucrative niche in cider with best-selling brands like Savanna and Hunter’s Dry. Heineken also seems very enamoured with Distell’s affordable wine ranges – especially the strong selling 4th Street box wine brand (which Heineken reckons has redefined the wine market).

Talk is that Distell – buoyed by the continued success of Savanna and Hunters – is itching to launch a premium priced beer. CBN wonders if Distell – which is headed by former SA Breweries executive Richard Rushton – will look to leverage a beer launch off its cider brands…or look to creating an entirely new beer range?

Whatever the case a new Southern African liquor giant should create additional competitive pressures as competitors look to protect market share. Whether consumers are fortunate enough to see a beer war declared in the next few months remains to be seen. Price cutting atrocities would, of course, be unavoidable if Distell can bring beer brands to market before the new enlarged corporate structure is finalised.

Rushton noted that proposed arrangement had the potential to leverage the strength of Heineken’s global footprint with Distell’s leading brands to create a formidable, diverse beverage company for Africa. “We will have a stronger route-to-market with a unique multi-category portfolio, furthering our sustainable growth trajectory and ability to compete on scale.” 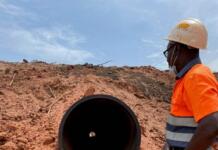