IN recent years, the South African road construction sector has experienced numerous challenges which has resulted in the general decline in its market size. The decline has been marked by medium to large-sized construction firms entering into business rescue or facing financial difficulty; resulting in having to sell certain segments in their companies.

Some construction companies have had to sell their Roads Construction Divisions while others have looked to private concessionaires to sustain the volume of work in the absence of public sector spending. In addition to a decline in government capital expenditure, the industry decline has been exacerbated by rising material costs, a decline in profit margin, the weakening Rand, poor business confidence and broken industry operating models that are no longer fit for purpose.
Consequently, the roads construction sector has continued to experience a lack of work resulting in weak trading conditions while still carrying some excess capacity which is required for the current volume of work on hand.

SANRAL (The South African National Roads Agency) manages about 3.6% of South Africa’s national proclaimed road network, which amounts to over 22,000 km of road. Although SANRAL manages less than 4% of the national proclaimed road network, they manage the roads that carry about 34.5% of all vehicle kilometres travelled and more than 70% of long-distance road freight (Table 1).
With 93.6% of SANRAL’s road pavement condition ranging from very good to fair (Figure 3), SANRAL’s principal activities are the financing, management, development, maintenance and rehabilitation of South Africa’s proclaimed national road network. However, 6.4% or 1,421 km of SANRAL’s road network is in poor to very poor conditions with 75% of SANRAL’s paved network older than the original 20-year design life span (Table 2). Major CAPEX investment is required to strengthen the road network. 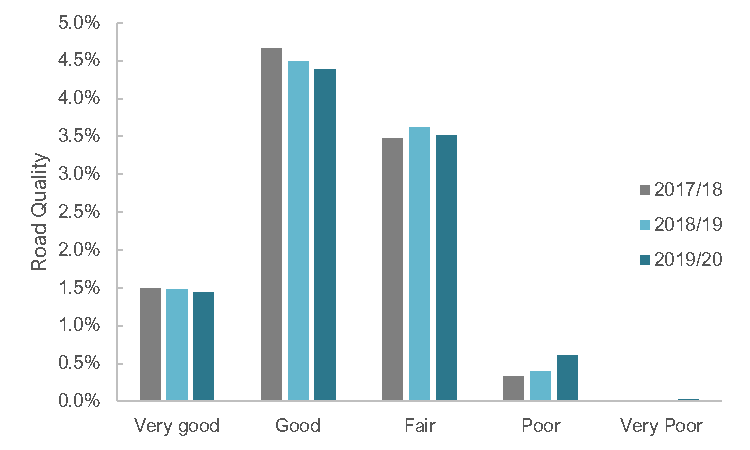 As the industry was already at its melting point, the COVID–19 pandemic further exacerbated cascading corporate failures leaving the industry in dire need for revitalisation and increased public spending. As the national lockdown regulations were eased, the industry displayed a rapid recovery by June 2020.

This was partly due to the resuming of construction activities, the South African government’s commitment to increasing public spending and SANRAL’s commitment to awarding tenders. These incentives, to increase public spending and increase the number of tenders awarded was done with the expectation to provide some relief to South Africa’s struggling construction industry.

As of August 2020, SANRAL had indicated that for the current financial year (2020/2021) 278 maintenance, operations and construction projects worth R30.2 bn had been advertised. As of late August, 136 of the 287 projects to value of R7.3 bn had already been awarded. By November 2020, it was estimated that SANRAL had awarded between R12 bn – R14 bn of the R30 bn worth of road construction projects.

With SANRAL spearheading the revitalization of the road construction industry, the market is optimistic of SANRAL’s ability to perform and award tenders. Additionally, the market is likely to see some ‘green shoots’ from government’s massive infrastructure investment drive as gazetted by President Cyril Ramaphosa in October 2020:

R47 bn of this R340 bn will be allocated to road construction over the next three years.

SANRAL is regarded as the largest contributor and generator of road construction and maintenance work in the public sector, and is likely to remain as such as their road network expands to 25,000 km in the long term. As SANRAL continues to make positive strides in awarding tenders, it is expected that the demand for contractors will pick up in the next 2 – 3 years.