Metrorail has lost 32 carriages in six separate, intentionally set fires since October 2015. This is equivalent to four trainsets, each making eight to ten trips in a daily schedule of 696 trips. The costs of these damages are sky high with last year’s damages amounting to R128m with a further R70m since January 2016.

These damages have seen commuters left desperate, with delays of hours sometimes, and the rail operator left struggling to provide a skeleton service.

“Understandably employers are exasperated with their work force arriving late or not at all; leading to unnecessary disciplinary sanctions and in some cases even job losses.”

“Delays of increasingly shorter duration will continue for as long as it takes to repair the extensive damage incurred between Philippi – Nyanga, Esplanade – Woodstock and until platforms 11 and 12 [at the Cape Town station] are reinstated,” says Richard Walker of Metrorail.

“The process to repair and rebuild carriages destroyed by fire is similar to a motor vehicle involved in an accident,” continues Walker. “PRASA’s loss adjusters and forensic experts examine the carriages, and then submit a report that is then considered for pay-out. Once the funding is guaranteed, the carriages are allocated to one of four suppliers in Cape Town. These contractors serve all rail operators as well as PRASA.”

Walker added that although every effort is made to expedite the return of carriages, there is no guarantee that PRASA’s needs will necessarily supersede other operators’ – making “an optimistic” timeline sit at a staggering 6 to 12 months.

Despite the major disruptions and increasingly angry passengers, Metrorail says that the resilience of the service proved itself.

“Even through the worst of recent events trains continued to operate. As our dedicated technical teams battle the odds, this trend of progressive recovery will continue.”

Walker concluded by saying that given the state of public transport and vehicular congestion (Cape Town is officially the most congested city in SA,) business needs to review whether variable working hours can be adopted by those businesses whose operations permit such flexibility.

According to Vineshia Petersen, Programme Co-ordinator of the African Rail Evolution event to be held from 18 – 19 October in Durban this year, although the Metrorail problem is extreme, around 60% of all investment in African Rail for the next five years will be directed at maintenance and rehabilitation projects. These projects will form the basis of an inter regional drive towards development and collaboration between the public and private sectors. 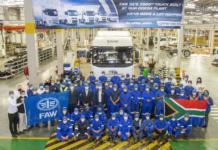